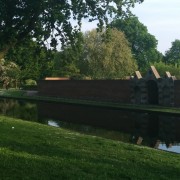 Thank You to Fiona O’Connor at Vision Redbridge & Valentines Park Staff, and to the staff and management at The Great Spoon of Ilford for all their help and support.

It was great to see so many competitors at Valentines Park tonight – we hope you enjoyed the race, the park and the social afterwards.

Results are below – we had two minor issues – we had a power supply problem with the socket at our download station in the pub failing – our contingency worked and once we identified the cause of the problem we got everything resolved quite quickly. There seems to be one non-download (Scott). If you did print a split sheet from the standalone computer but did not download to the computer, please take a photo of the splits and email it to chair@chig.org.uk by Sunday 8 June and we will get you added to the results.

The other related to the map and for those of you with very good eyesight, the area of the map where there were map corrections with locked gates, it seemed that (if you had very good eyesight) that you could get through a gap – however when a few of you tried, there was an unmapped fence. We are considering how to respond to an appeal for leg 17-18 on long to be voided.

The members of CHIG’s Executive Committee considered the appeal following the guidelines set out in the British Orienteering Rules for a Level D event. The 3rd locked gate, which was not mapped and not mentioned at the start did indeed cause the leg to be unfair for some runners. However, having reviewed the splits and the outcome on the leading runners, it was considered important to recognise that Jonathan Albon was the fastest runner on the day. The review of the splits also suggested that the voiding of the leg would lead to unfair outcomes for other runners – with those that tired towards the end of the race and struggled on what was one of the longest legs benefiting from the exclusion of the leg to the detriment of other runners. The results will thus stand as per the preliminary results, except to include Scott Collier who had not downloaded to the laptop, only to the standalone printer.

We apologise to any runners who were adversely impacted by the third locked gate and the absence of this gate from the map and startlane briefing.

The results have now been manually adjusted to include the result for Scott Collier, him having presented evidence that he downloaded to the standalone printer (sent in a photo of his printout). Splits files have NOT been amended, so his name remains excluded from these.