Ed Catmur (SLOW) claimed a second successive victory in the North London Street Orienteering League event of the new 2013-14 season at Hoxton on Thursday night. His victory margin was even bigger than September’s Dalston race as he finished with 610 points, some 170 points clear of second placed Ben Smith (SLOW) 440 points. Vince Roper completed a 1-2-3 for SLOW runners also scoring 440 points, but time penalties reduced his score to 422.

The course took competitors west of Hoxton station and our race HQ of the Troyganic Bar & Café towards Old Street and Angel, with certain routes busy with pedestrians and cyclists. This combined with some clever control positioning by planner Russell Peters saw 18 runners incur time penalties.

In the female competition it was also a SLOW 1-2-3 with Jo Reeve out top with 370 points (reduced to 355 after time penalties), with Claire Heliot second on 310 and Helen Gardner third on 280.

Thanks to Russell Peters for planning and organising and to John Duffield for helping on the night and compiling the league standings after the event. A big thanks also to the Troyganic Bar & Café for allowing us to again use their downstairs room as race HQ.

After two events, we have had 52 competitors, 34 male and 18 female. SLOW are the best represented club with 18 with each of CHIG, LOK and HH with 6 each.

Next month we head to Limehouse for race three in the series before the league takes a break for December. There will however be StreetO events from both SLOW and LOK in December, so still opportunities for more fast, furious and fun racing! 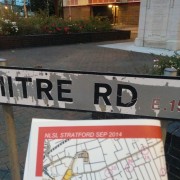