Our first training session had a good turn-out despite the poor weather. I hope everyone found the exercises on judging distance useful, despite some of the features being hidden by the recent rapid bramble growth! Good Luck to New Zealander, Liam, who joined us on his way up to Scotland to compete in the World Adventure Racing Championships. I hope he’ll be putting his new pace-counting skills to good use! Better Luck to club member Mark Ford who’s competing in the same competition!

Last night the second session, run by Tim Pribul, had an even better turn out, which I shall put down to the weather rather than taking it personally.
Next week sees a change of location from Hainault to Latton Woods. I encourage all club members to make the most of these sessions, particularly as the CHIG v HAVOC series kicks off soon and they’ll help you run your best at the Club Championships (see the Dates for your Diary section below)!

The SE Relays was a very enjoyable return to running (a Green leg) for me after spraining my ankle just before the British Championships. I hope everyone else also enjoyed it (apart from Colin, who hates relays, but very generously stood in at the last minute!) Comments from the Planner and Organiser are now on LOK’s website (www.londonorienteering.co.uk)as well as some photos of the winning teams and one of the CHIG club tent!! We fielded 4 teams in the Handicap class who were fairly evenly matched on paper. On the day, Chigs in Space romped home (despite Tom running off the map!) 24 minutes ahead of This Little Chiggy.

Maybe Paul had spent too much time looking over his shoulder as Chiggy Chiggy Bang Bang finished less than a minute behind them. Chigs Might Fly weren’t far behind and had Colin not stopped to cool off in the open air pools, the results might have been different!

Congratulations to Carol, Robin and Ruby on their excellent individual results. Congratulations also to John, Carol and Tom who came second in the M/W60 relay (again!) 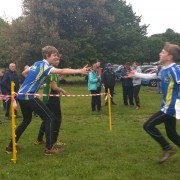