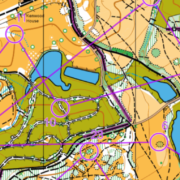 In what looks likely to have been one of the last UK orienteering events for a number of months, CHIG members put in a very creditable performance in the CompassSport Trophy qualifying event on Hampstead Heath on Sunday 15 March. Vying against five other clubs for a place in the CompassSport Trophy finals in October, CHIG mustered a team of 14, covering 8 of the 10 available age classes / courses.

The event offered opportunities for both fast running and intricate navigation, and quite a bit of mud. Ultimately, the efforts of CHIG’s competitors produced a total score of 1,120 for forth overall but a tantalising 33 points off Mole Valley in third and 36 points off DFOK in second. Guildford Orienteers, with a commanding score of 1,273, secured their place in the finals.

Special thanks must go to LOK for putting on an enjoyable and well-planned event, with Paul Todd as organiser, Anthony Flick as planner and David Frampton of Happy Herts as the event controller.

CHIG’s roll of honour for club members whose scores contributed to the club’s total is as follows:

Many thanks to all CHIG members who took part and represented the club!

Want to join the discussion?
Feel free to contribute!