Ed Catmur (SLOW) blitzed the opposition with a superb total of 660 points, reduced to 647 after time penalties, at the first North London Street Orienteering League event of the new 2013-14 season at Dalston last night. The SLOW orienteer had 110 points to spare over Ben Lovett (SLOW) and Russell Peters (CHIG) who both finished on 550 points. The course took competitors north of Hoxton station and our race HQ of the Troyganic Bar & Café into Dalston.

In the female competition, Helle Beattie (SLOW) came out top with 470 points, reduced to 451 after time penalties, with Elaine Battson second on 440 and Jayne Sales (SLOW) third on 410.

Thanks to Harold Wyber for planning and to John Duffield, Russell Peters and Alan Brett for stepping in on the night to organise proceedings when the planner/organiser was unable to make the event due to late notice work commitments.

A big thanks also to the Troyganic Bar & Café for allowing us to use their downstairs room as race HQ – we will be back there again for next months race which ventures south of Hoxton Overground station. 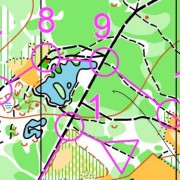