Results for the event are now published. Updated league tables to follow shortly.

Thanks to everyone for attending on a cold night. At least most of the snow had gone!
I hope you all enjoyed running round on what was the first map I have ever planned. I’ve learned a lot by doing it and realised some things I’ve missed for next time. There was some detail missing from the OpenStreepMap base data that led to some confusion on a couple of controls. We marked those leniently where it was clear what had happened. Hopefully this didn’t spoil anyone’s enjoyment.
I’ll check the OpenStreetMap data in more detail, earlier, in future.
Thanks to John for helping me organise and to Alan for helping with the scoring on the night.

I took pictures of all the controls and you can see them on Picasa here.

If you missed the event and would like to give it a go in your own time, the map and question sheet are available for download in PDF format. 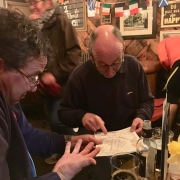