At the CHIG annual dinner on Friday night last, the Maycraft Trophy was presented by club Chairman Alan Brett to Tom Edelsten in recognition of his contribution to the club.

In making this year’s choice, the Chairman and last year’s winner Ray Curtis cited Tom’s contribution towards the club’s mapped areas, his support of planners in the lead-up to events, time volunteered both in planning and helping at orienteering events and activities put on by the club and his role on the committee.

In a speech prior to presenting the award, the Chairman noted the contributions of the members of the club over the past twelve months towards what was a very busy year for the club.

In particular, he publicly thanked Jennifer Taylor, Tim Pribul, Mike Brett and Tom Edelsten for their significant roles at the Southern Championship, John Duffield for his co-ordination of the North London Street Orienteering League, members of the volunteering working group who were working on an area identified as a high priority by the committee for the year, Sally Pribul and Harold Wyber for their involvement in organising accommodation, travel arrangements and team entries for the Compasss Sport Trophy Final, Ros West and Josh Jenner in designing publicity postcards and all those involved in volunteering at club events.

Thanks to Cafe Rouge at Loughton for hosting the annual dinner and to Sally Pribul for making the arrangements. 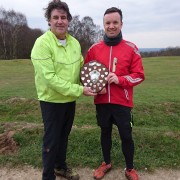 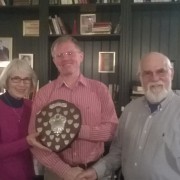